The new WebSockets feature on Golioth allows users to stream data out to external services, such as visualization platforms and web apps. This includes showing “real-time” data from sources on embedded devices, such as sensors. Let’s look at how these are different than previous offerings.

What is a WebSocket?

A WebSocket is a persistent connection that runs over TCP connections between two entities, normally a browser and a server. Thought about in the abstract, it is a datapipe that allows bidirectional information. Golioth is using these to push and pull data between the Golioth Cloud and another endpoint, such as a browser or visualization tool.

How is this different?

As a hardware engineer, I find myself falling into the familiar trap of, “it’s all just moving data around!”. But that, of course, is wrong. Once your data moves from your device up to the Golioth cloud, you normally want it to go somewhere or to do something. Readers familiar with our other service offerings will remember that we have a REST API. If you want to pull data using the REST API, you need to request that next chunk of data. An external application like an Android app would need to ask for an update from the API on a regular basis, perhaps every second. This pull action is akin to “polling” in a microcontroller. Hardware and firmware designers will know the downsides to this method, especially in terms of processing overhead. But it happens all over the web and there are lots of reasons to use the REST API. In fact, this is how we update the Golioth Console when users are viewing LightDB data: With WebSockets, you are not polling; you are being pushed data as it appears on the platform. That is, “from the perspective of the web application showcasing the data”, it’s a push, instead of a pull. The WebSocket connection must remain open in order to receive this data, but if it is, any new data will flow to the web application on the other side. Combining a WebSocket with LightDB Stream (Golioth’s time-series database) allows you to potentially stream data from a device up to the Golioth cloud and then out to a charting service like Grafana. In this way, it’s a conduit for sensor data in “real-time” (overhead will cause some delay between the action and the charting of the event).

Let’s imagine environmental sensors connected to an nRF9160 development board like the CircuitDojo nRF9160 feather. In fact, there is a demo from Jared Wolff (creator of the nRF91 Feather), showcasing the environmental add-on board called the “Air Quality Wing”. That demo implements this using the REST API. Now instead of Grafana constantly pinging the REST API for the next data point, we’ll be able to update that demo to have data streaming directly to Grafana as a change happens. We’ll have demos showcasing this functionality in the near future.

Our team released new documentation about WebSockets alongside the new functionality. We love to hear from users putting features to good use, so be sure to stop by Golioth Office Hours on our Discord server to show off what you have built. 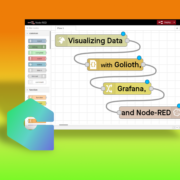 Embedded Rust with Golioth and the Nordic nRF9160